The Iron Art Company of Phillipsburg, New Jersey was in business from  1954 to 1989 (see Update below). It was a major distributor of cast iron products in the 1950’s and 1960’s, contracting with independent foundries to provide the castings. Operations at the Iron Art facility included light assembly, bolting the components together, and dip painting of ornamental iron objects.

Although Iron Art used Phillipsburg as their official business address, the location of the Iron Art facility was actually four miles away in Alpha, NJ. Their official address was listed as Iron Art Company, 3rd and Vulcanite Avenues, Borough of Alpha (NJ), County of Warren: Lot #4, Block #96.

The property was originally the site of the Bernard Canavan Coal Company from 1928-1951. That land was purchased in 1955 by Melvin H. Friedman & John A. Zawarski, who constructed a building that would eventually house the Iron Art Company in 1959.

Iron art continued to distribute ironware into the 1980s. William Grovatt is recorded as another co-owner/operator from 1986-1989, after which Iron Art closed.

In 1995 the former Iron Art property was purchased by Jim & Jack Sheridan, co-founders of the Sheridan Printing Company (now Sheridan Communications). Prior to the transfer of the property, the New Jersey E.P.A. ordered the facility to be cleaned of any hazardous wastes. Any remnants of Iron Art products littering the place were also disposed of at that time.

Since I only have one full sized Iron Art catalog in my collection, I’ve shared all 16 pages. The cast iron items presented are typical of those produced by many mid 20th century American foundries like Wilton and John Wright. You’ll notice that trivets were but a small part of the decorative items that Iron Art distributed. Most castings were signed IRON ART on the reverse; some also bore a stock number. In the example shown, only the mini trivet is signed IRON ART; the little swan iron is not. 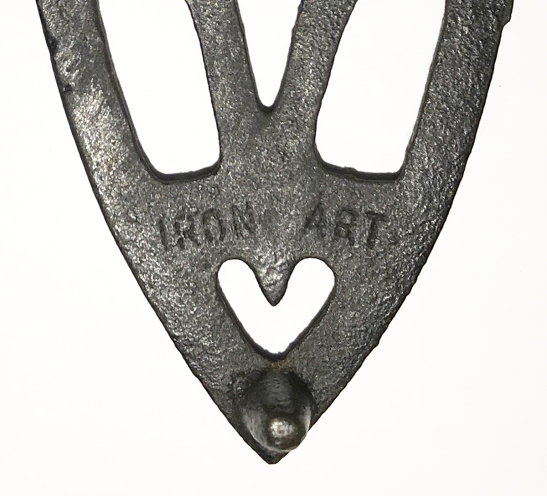 Today I received the following email from Russell Ware.

I thought you might appreciate some additional comments on Iron Art Co. I have a similar 1983 catalog you have posted on your website. I also have one without any dating that, from my estimate, is from the 1960’s.

You state on the website that Iron Art started in 1959, but I just received a catalog stating “1954-1955 Catalog” on the front page, as well as on the price list. The date on this catalog would seem to be in line with the 1955 purchase of the building you mention on the webpage. This catalog is both smaller in size and with fewer pages than the other two catalogs I have. It does not look like they were in full production yet.

My reply: Russell, thank you for your comments. For my first book (2004) I corresponded with the late Phillipsburg historian Ronald Wynkoop, who interviewed people in the area to compile a history of the Iron Art Company. This is his research, an excerpt from my first book (2004):

The Phillipsburg property initially was the site of the Canavan Coal Company from 1928 to 1955. An active railroad spur led up to the building, presumably to transport coal. In 1955 the property was sold to Melvin Friedman and John Zawarski, who together established the Iron Art Company. A finishing and distribution center, located at 1400 3rd Avenue, Phillipsburg, was added in 1956. Apparently, no casting was ever performed at this location; operations included light assembly, dip painting, and drip-drying of ornamental iron objects.

Clicking the first image will open a Slideshow. There are controls at the bottom of each screen to enlarge the image to full resolution. Click again (+) to zoom in.

Page 5: Faithfully Cast In Iron From The Original Models

Close-up of the trivets

Close-up of the candle holders.

Page 9: Swinging Wall Planters, Lampholders In Cast And Wrought Iron From The Original Molds. This caption (cut off in image) appears below the 3 colored base hurricane lamps: LA Glass Lamp 13″ H. Will fit only JM2, JM 351, JM 352 and LB 48. Packed in box of 4.

Page 11: Kettles, Muffin Pans. This caption appears below the muffin pans: The five muffin pans have been treated with a vegetable coating. They are not painted. Each pan comes with instructions for seasoning.