If you have a copy of Esther Berner’s book A Collector’s Guide To Pressing Irons and Trivets (1977) you will find at least two instances where she associates the Wapak Hollow Ware Company of Wapakoneta, Ohio with the W. H. Howell Company of Geneva, Illinois.

● 27A, p. 21: image of an H design sad iron stand with two irons, WAPAK on the handles, identified as products of the William W. Howell Company.

This leads to a question recently received from Jim Halikias.

In your first book (The A-Z Guide To Collecting Trivets, 2004, p. 84) you mentioned that Wapak was a trademark of the W. H. Howell company of Geneva, Illinois. Some “Howell” appearing trivets say WAPAK on the reverse – but WAPAK was a manufacturer in their own right, located in Wapakoneta, Ohio. Any collector of vintage cast iron cookware will know the name Wapak, as they made a full line of skillets, dutch ovens and similar products. They also made sad irons. One of my reference books shows the full line of Wapak products, including the sad irons, but it does not show trivets.

So I’m guessing that Wapak had Howell make some of their “H” trivets with the word “Wapak” on the back to sell with their Wapak sad irons. But this is just a guess. I don’t know why Wapak would not make their own trivets. Or maybe it was Wapak who made all the Howell trivets? Just wondering what your thoughts are.

The William H. Howell Company produced at least five different sad iron stands. For the purposes of this discussion I’ll share this one version. Note that the measurements of the Wapak stand are slightly smaller than the Howell stand, suggesting the Wapak stand might have been reproduced using the Howell “H” stand as a pattern.

● One Size Smaller: Antique trivets were often used as patterns. Any resulting reproductions would be slightly smaller, due to the shrinkage of molten metal after cooling. Cast iron shrinks 1/8″ (2/16″) per foot; brass and copper shrink 3/16″ per foot. 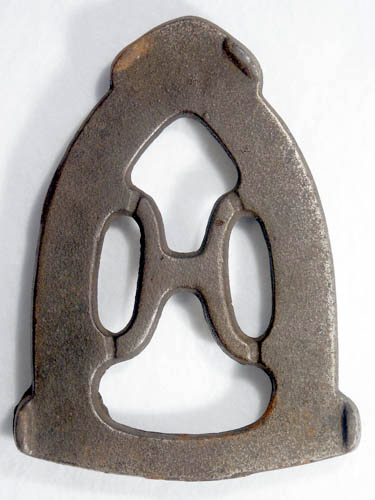 I must admit that some of the research for my trivet books came from existing references. But after joining Pressing Iron and Trivet Collectors of America (then called the Midwest Sad Iron Collectors Club) in 2003, I began to rely on my fellow PITCA members (and the PITCA Library) for the most accurate information on pressing irons and their history.

I contacted Dennis McDonald, well known in our club for his wealth of knowledge and research capabilities, and we discussed Jim’s comments and questions. Here’s a summary of those conversations.

The W. H. Howell Company (1867-1954) was a leading producer of sad irons, trivets and fluters in the United States from the mid 1800s into the early 1900s. But as a new century brought electricity to American homes, the demand for and popularity of sad irons decreased. In 1923 Howell switched to the production of other cast metal products including mass-produced metal furnishings.

The Wapak Hollow Ware Company produced sadirons, sad iron stands, and a variety of iron hollowware from 1903 to 1926. They produced a stand similar to the Howell “H” that was unsigned on the front but with WAPAK on the reverse.

● There is no evidence to support that the Howell foundry contracted out foundry services to others.

● We may never know if Howell sold their molds to Wapak. However, by the time Wapak began producing sad irons and stands the Howell patents had expired. Wapak could have produced pressing iron products, adding their WAPAK signature, without fear of patent infringement.

The following information was documented in an early 1900 Wapak catalog (reprinted in 1991 by Combs Printing of Wapakoneta, Ohio). Notice that the “H” iron stand was sold individually as well as being included in a set of Mrs. Pott’s Irons.

11/13/21 In going through my records I discovered another version of the WAPAK stand. It’s a rough casting with a gate mark along the side. Measurements: 7″ x 4″ with three 5/8″ feet. Signed WAPAK on the reverse. I’m unsure if this was produced by the Wapak Hollow Ware Company or whether this is a fantasy item cast using an actual WAPAK sad iron stand as a pattern, then adding a handle.