because after many years off searching …

I’ll finally be adding this Rimby 12 Hearts trivet to my collection!

But this 12 Hearts design, on the handle reverse,

bears the most complete, wonderful signature of all:

The following excerpt is shared from my second book The Expanded A-Z Guide To Collecting Trivets, 2010.

Mention the name William Rimby among trivet collectors and the group will become animated with comments by those who have added at least one Rimby trivet to their collection, and those who are still hoping to! Because moulders signed so very few early American trivets, the fact that Rimby trivets were signed is significant.

The mystique and allure of the Rimby trivet has been further fueled by information published on page 104 in the 1990 reference Trivets & Stands. Thanks to Rob Roy Kelly and James Ellwood, we learned that William B. Rimby was a master moulder, casting some beautifully designed trivets, most of which were signed and dated between 1841 and 1843. He also obviously worked in Baltimore, Maryland since a few of his larger trivets were signed Baltimore.

PS: Be aware that this 12 Hearts design was heavily reproduced in the mid 20th century. Some have a foundry signature (Wilton, JZH, etc) or a lot or stock number on the reverse; others are unsigned. Most of these reproductions have shorter legs for wall display, but some do have long legs to replicate the original.

I’ve provided images of the front and back so you can zoom in and appreciate the beautiful detail. PS: I left the braided wire hanger in place so you can see how I attach it. I prefer braided wire because it’s softer and doesn’t scratch the metal. 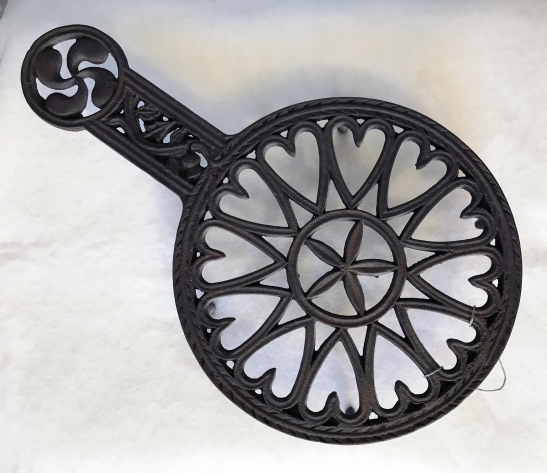 Q: I’ve seen the 12 Hearts trivet painted and unpainted. I’m curious why some were painted and others not. Can you give some history? Many thanks! Susan Firth

A: The oversized 12 Hearts design has been popular since Rimby introduced it in the 1840s. Trivets enjoyed a resurgence in popularity with American housewives in the late 1940s-1970s. Companies like Wilton and JZH reproduced various trivet designs in a flat black finish; some featured colorful enamel accent painting. The trivet below, signed JZH 1948 G, was included in John Zimmerman Harner’s Alphabet Trivets series. (FYI, Virginia Metalcrafters never added enamel accents to any of their trivets.)

★ On the Home page, click Older Posts to populate all posts back to 2008. ★ In most cases, images will enlarge if clicked on. ★ Click the header TRIVETOLOGY to return to the main page. ★
Follow TRIVETOLOGY on WordPress.com