Celebrating the past and future of Virginia Metalcrafters 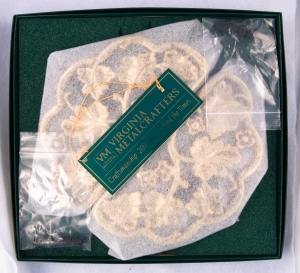 Virginia Metalcrafters (VM) was founded in 1895 as the W. J. Loth Stove Company of Waynesboro, Virginia. (In 1890 it was called the Waynesboro Stove Company – still Mr. Loth.) They initially manufactured cast iron stoves and wood and coal heaters.

In 1938 Loth installed a brass foundry and Virginia Metalcrafters became the brand name of the company’s brass and iron giftware line. March 1, 1940 marked the first use of the VM Betty Lamp hallmark on their products. When brass was once again available after World War II, production was resumed and their gift line was expanded. 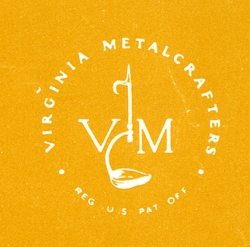 Trivets were offered in Solid Brass, White Bronze, Aluminum (called Silvertone) and Cast Iron (in a Polished, Verdi or Black finish). VM utilized a stock numbering system of a 9 or 10 followed by another number; for example, 9-18 Doodlers Dream or 10-17 Kings Arms. Virginia Metalcrafters produced the largest number of original trivet designs of any modern manufacturer.

FYI: Per Bill Eckman, Charles Eckman’s son, the date on a copyrighted VM trivet refers only to the copyright date. The actual date of manufacture could be anywhere between then and 2006 when the company closed. 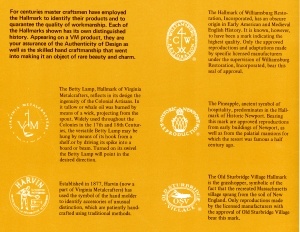 VM registered hallmarks, from their 1969 catalog

Trivets were produced from 1946 until December 2006, when the Waynesboro, Virginia foundry doors closed for good. But now there’s new life for this historic property! In 2013 the foundry and surrounding property was purchased. Renovations are almost complete for a 5,000 barrel production craft brewery and a 2300 square foot taproom. There may even be room to house artisan crafters and other tourism services.

And check out the Virginia Metalcrafters Facebook Group for collectors of VM castings! A number of former employees belong to the group and bring a wealth of information on the workings of the foundry and their products.

According to Bill Eckman, whose father owned Virginia Metalcrafters, lacquer was applied through the years to VM brass trivets.  He is unsure whether that included cypher trivets marked CW (Colonial Williamsburg).

Q: What’s the best way to polish Virginia Metalcrafters brass? Mine has been used regularly and is tarnished.

A: It all depends on whether or not the brass was lacquered. First, review the information on brass care at the Trivetology post Caring for brass, bronze and copper trivets.

The following additional information can be found at the Virginia Metalcrafters Facebook Group.

● Virginia Metalcrafters’ Colonial Williamsburg (CW) reproductions made before the mid to late 1970s were NOT lacquered. Those bear the CW hallmark and can be polished by hand fairly easily. Back in the day VM sold “Colonial Brass Polish” for polishing their brass. Today you can use a product like Brasso.

● Around the mid to late 1970’s Virginia Metalcrafters began to lacquer all their CW brass. VM lacquer was sprayed on, but was not baked. You may decide to remove the lacquer on castings that have tarnished. (1) You could try lacquer thinner, following the directions on the product. (2) An alternative would be to have a professional metal refinisher strip and restore your brass VM casting.

Waynesboro, Virginia’s Basic City Beer Company has opened a restaurant in what was formerly the Virginia Metalcrafters showroom outlet. The name? The Showroom, of course! 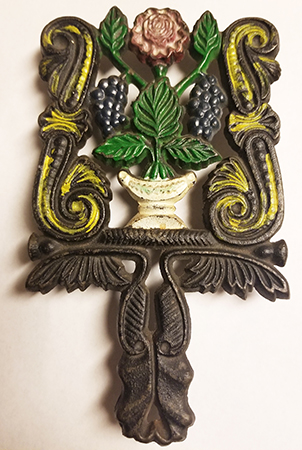 Question from Cindy: I posted this trivet on Facebook and a few collectors commented they never saw this one. On the reverse it’s signed 9-2 GRAPE with the VM logo. Are the common cast iron trivet designs from Virginia Metalcrafters harder to find?

Most VM trivets were offered in a black finished cast iron or a polished or antiqued brass. Less commonly seen was a finish called Silvertone and another called Verdi (verdigris applied over cast iron). The VM line of cast iron trivets got more limited over time as they moved more into brass cypher trivets and other specialty offerings created for museum gift shops like Old Sturbridge Village (OSV), etc.

This question appeared today at the Virginia Metalcrafters Facebook group: “Is there an easy way to tell which VM pieces were manufactured at the Waynesboro (Virginia) plant?”

Answer by Bill Eckman, whose father owned Virginia Metalcrafters: “Certainly if they have a VM hallmark they were made in Waynesboro, except for the last few years the company was in business when some items were cast overseas and just finished in Waynesboro. The is very little out there that was not made in Waynesboro. Harvin made some items in Baltimore before VM bought them but they wouldn’t have the VM hallmark. But basically it would be difficult otherwise to tell things apart. Just like a VM leaf tray made in 1950 and still made in 2002 would be indistinguishable as to which was made when (other than maybe the yellowing of the lacquer).”

Question from Marta: “I have just come into two pair of the trivets pictured at the top. I’m wondering if you know if they are a reproduction of historical pieces. I read elsewhere that VM did reproductions of pieces found in Williamsburg.”

Answer: I’m not aware of an antique trivet in this exact design or configuration. From the article The Legacy of Virginia Metalcrafters of Waynesboro: “There were different categories of items, including Reproductions and Adaptations. Reproductions were exact copies of items that were in existence in Colonial Virginia, and adaptations were items that were styled after the era.”