May your blessings outnumber
The shamrocks that grow,
And may trouble avoid you
Wherever you go.
~Irish Blessing

The Ancient Order of Hibernians, established in 1836 and still active today, is the oldest and largest Irish-Catholic fraternal organization in the United States. This horseshoe plaque trivet is cast iron, measuring 6 5/8 x 4 1/4”. On the face: AOH, shamrocks and a Celtic harp. Unsigned on the reverse. Most of the original green and gold enamel remains.  Circa 1880-1900.

This heavy bronze Victorian era trivet is English, measuring 7 5/8 x 4 7/8” with three 1 1/8” legs. On its face is a crown and symbols of the British Isles: the Tudor rose (England), a thistle (Scotland), and shamrocks (Ireland). Unsigned on the reverse. Some verdigris, a bluish-green patina caused by oxidation, is noted on the surface. 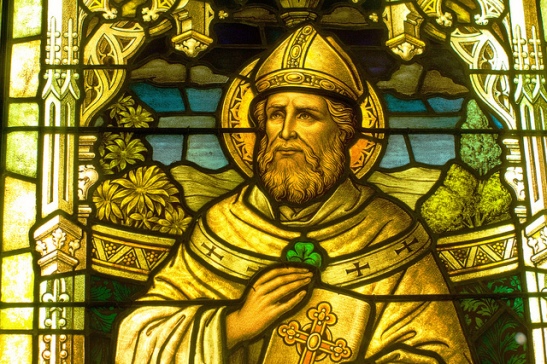 Why do we celebrate St. Patrick’s Day, and what’s the significance of the shamrock? When St. Patrick arrived in Ireland as a Christian missionary in 432, he used a shamrock to teach the significance of the Holy Trinity. The three leaves of the shamrock represented Father, Son and Holy Spirit; the mystery of three beings in one. March 17th is the date of St.Patrick’s death and his feast day. Here’s a short video on The Life of St. Patrick by Catholic Online.

PS: Know your clovers! A shamrock is a three-leaf, white flowered clover plant and the national symbol of Ireland. A four-leaf clover is a mutation, occurring once every 10,000 plants. Although rare and considered lucky, it’s not an Irish symbol.