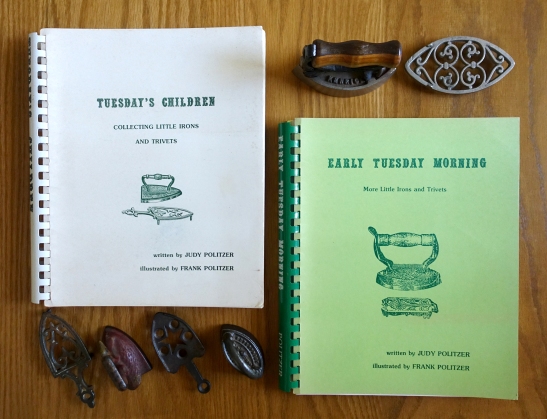 The books Tuesday’s Children (1977) and Early Tuesday Morning (1986) are considered the definitive references on little irons and trivets. Written by Judy Politzer and illustrated by her husband Frank, each book was thoroughly researched with descriptive text, photographs, illustrations and catalog pages throughout.

One of the most unique and appreciated features of these books is that each iron sole or trivet perimeter was traced over the text describing the item, making possible a direct size comparison.

There’s also guidance in differentiating an original from a reproduction, as well as a comprehensive Index which facilitates cross-referencing. In using both books I’ve found very little duplication of information in the hundreds of irons and trivets presented.

The second book Early Tuesday Morning was completed and published by Frank Politzer in 1986 after Judy’s death the year before. It is dedicated “To Judy, whose indomitable spirit, charming wit, unfailing good cheer and enduring love of people, created and nourished the collection, the book, the enterprise, the network of friendship — all that is Tuesday’s Children.”

Used copies of these two reference books are available online. However, if you’re looking for new, old stock reference books in mint condition, did you know you can purchase them through Pressing Iron and Trivet Collectors of America? After Frank Politzer passed away in 1999, his family bequeathed the unsold copies of Tuesday’s Children and Early Tuesday Morning to the Midwest Sad Iron Collectors Club. Copyright to both books was also transferred to the MSICC. You’ll find these spiral bound books available for sale at the PITCA website. (The MSICC legally changed its name to PITCA in June 2008.)

Pages reprinted with the permission of Pressing Iron and Trivet Collectors of America (PITCA).