This design is among my favorite trivets. The inscription on the unusual curved handle reads E R MANLEY. The center and outside edges feature braiding. Eleven circles, each with a five pointed star within, encircle the trivet. The center and handle feature a decagram, a ten pointed star composed of two pentagrams on top of each other – one right side up, the other inverted. The decagram symbolizes spirit and matter ~ the balance of all things.

Documentation on p. 114 of A Collectors Guide To Trivets & Stands (T&S, 1990) grades this trivet as Rare with an estimated production date of 1870 or earlier. The pattern is sometimes referred to as Star and Braid. Note the routing (backcoping) on the reverse of the trivet. Backcoping was a technique that equalized the weight of a delicate casting, making it more structurally stable and less liable to crack.

This trivet is cataloged in T&S with a “P” indicating it was from the collection of William Paley of Ontario, Canada. Many of Paley’s Early American trivets appear in T&S. Upon his death in 1983 the Shelburne Museum in Shelburne, Vermont was bequeathed his 2100+ piece trivet collection. Over 200 of the finest trivets from that collection were selected and placed on display in 2005, composing the largest display of its kind in the United States. The Paley trivets are displayed in the Variety Unit.

Now interestingly, my trivet’s appearance and dimensions differ slightly from those noted in Trivets & Stands. This makes me wonder … could the example documented in T&S actually be a copy made from an original? Kelly & Ellwood remark about the rough appearance of their casting. Note also that the measurements in T&S are “one size smaller” than my example.

One Size Smaller: Antique trivets were often used as patterns. Any resulting reproductions would be slightly smaller, due to the shrinkage of molten metal after cooling. Cast iron shrinks 1/8″ (2/16″) per foot; brass and copper shrink 3/16″ per foot.

●  My trivet: Cast iron, 8 1/4″ long (including handle) x 7″ diameter with four 7/8″ feet. Weight = 1 lb 5 1/8 oz. There is finning along the outer edge of my trivet. I can’t definitely identify a cast mark along the edge or on the reverse. This is a very finely designed and cast trivet.

The four feet on my Manley trivet are just under 1″ in length, in proportion to its delicate casting. Although longer legs are the norm on antique trivets, some do have shorter feet. A trivet such as this likely would have served as a coffee or tea pot stand.

Do you have one of these beautiful trivets in your collection? What are the measurements of your trivet? Have you ever seen this design cast in brass or bronze? Do you know of any other trivets signed E R MANLEY? If so, please Contact Me and share your information. Thanks in advance! 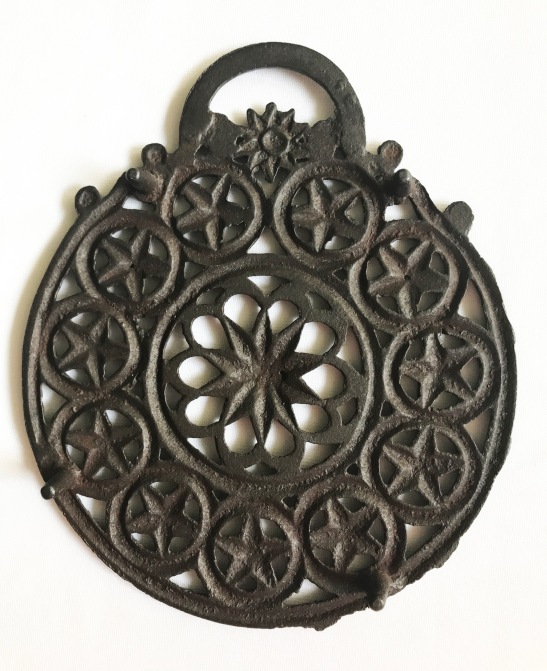