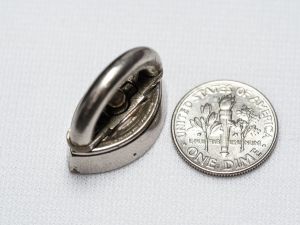 Have you ever seen anything so tiny and intricately formed? This miniature Enterprise iron is described on p.143 of Tuesday’s Children by Judy Politzer (1977). At only 7/8″ long, it’s cast of nickel-plated brass. On the bottom is the inscription ENTERPRISE MFG. Co. PHILADA.

In 1871 Mary Florence Potts patented an improvement on the household sad iron. Each set came with several double-pointed bases and a detachable wood “Cold Handle”. The Enterprise Manufacturing Company of Philadelphia acquired Mary Florence Potts’ iron patent and soon became a leading producer of household sad irons. Here’s one of their trade cards. 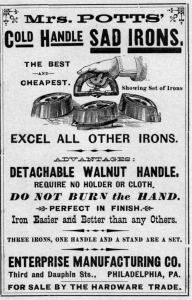 The Centennial International Exhibition of 1876 was the first official World’s Fair in the United States. Held in Philadelphia PA, it celebrated the 100th anniversary of the signing of the Declaration of Independence. The Enterprise Mfg. Co. displayed their products in Machinery Hall, Section F8, Column 56. They gave away these tiny “Baby Centennial” working models at their booth at the 1876 Exposition. The handle detaches from the base, just like the full sized Mrs. Potts iron, by sliding the tiny latch. 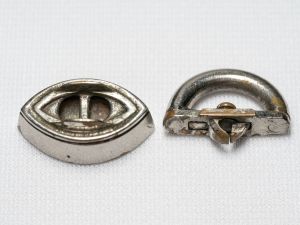