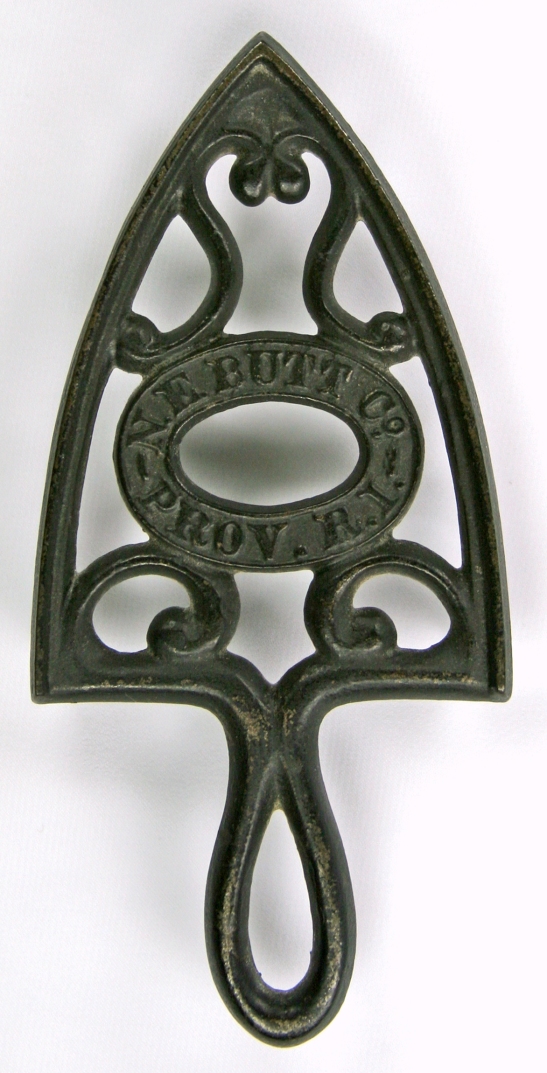 This little trivet was was created by the New England (N. E. ) Butt Company of Providence, Rhode Island. Details: cast iron, 5 x 2 3/8” w/three tiny feet, smoothly cast edges and a double berry finial on a curlicue design. The open oval center ring holds the advertising. Circa 1870, this toy trivet was an advertising premium; no companion toy sadiron is known to exist.

Established in Providence, RI in 1842 by N. A. Fenner, the New England Butt Company was the world’s largest manufacturer of cast iron butt (door mounting) hinges until 1880. In that year cast iron hinges became obsolete when butt hinges of thinner, pressed metal came into favor.

The antique cast iron hinge below is a size 3 1/2″ Eastlake style with a design of flowers and geometric details on a textured background and decorative steeple finials. Notice the attention to detail, typical of metalwork from an era when even something as ordinary as a door hinge was crafted with pride. The reverse is signed 3 1/2 x 3 1/2 (size).

After 1880 the New England Butt Company converted to the manufacture of industrial braiding machinery which could produce braids of silk, worsted, and cotton as well as telephone, electric light and crinoline (for a woman’s hoop skirt) wire. Check out this interesting video featuring a restored 1904 N. E. Butt Company rope braiding machine in operation. Production of braiding machinery continued at the same location until 1955, when the New England Butt Company was sold to the Wanskuck Corporation. Machines continued to be produced there until 1983, at which time all factory operations ceased. 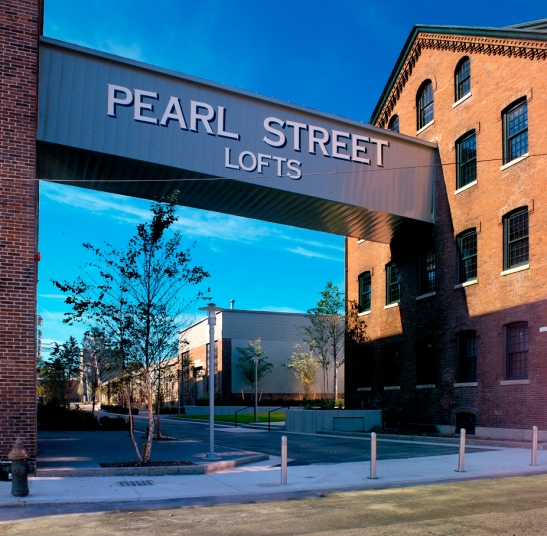 The original New England Butt Company buildings were nominated and added to the National Register of Historic Places in 1980. The buildings, many with interesting architectural details, were renovated in 2002-2004 by DBVW Architects and the Armory Revival Company. These images document the renovation in progress. Today, Pearl Street Lofts at 304 Pearl Street provides both commercial and residential space in a historic yet upscale setting.