Many questions received from collectors revolve around the history, age and/or value. This is the third in a series of three blog posts to help you better evaluate trivets. See also Antique trivets and Vintage trivets.

World War 2 interrupted the production of household metalware since iron and steel was funneled into making armaments. After the war trivet foundry production resumed with an emphasis on decorative trivets for housewives. Trivets became popular as gifts, for kitchen use and as wall decoration in the 1950s-1980s.

From the August 15, 1942 issue of The Saturday Evening Post.

The majority of mid 20th century trivets are reproductions of antique trivet designs and are often referred to as “repros”. Most have short feet less than 1″, making them ideal for decorative wall display or casual tabletop use.

Miniature (toy-sized) reproduction trivets were also sold. Many are signed MT, signifying miniature trivet, plus a company’s item number and/or other lettering. I have several foundry catalogs; they all offer trivets in both mini (toy) as well as a full size (7 to 8″) versions. Being modern castings, cast marks are ground off and no longer visible.

Begin by turning over your trivet. Antique trivets were rarely signed. Vintage trivets sometimes had an inscribed stock or lot number. In contrast, most reproduction trivets are easy to identify from one or more of these markings on the reverse: the foundry name, company logo, a lot or stock number, the design name or a date.

The reverse of a reproduction trivet is typically flat, without backcoping. Cast marks are rarely visible since they were ground off at the foundry prior to final finishing. Most cast iron trivets were then painted flat black; some were accent painted with enamel. Any brass trivet with a lacquered finish is also most likely a contemporary casting.

Additional clues in determining age might appear on the trivet, on its packaging or in an advertisement.

● Adhesive price stickers were introduced in 1935.

● Trivets sold with rubber or plastic caps on the feet postdate 1945.

● Registered Trademark Symbol ® was introduced in 1949.

● Iron Art Company, Phillipsburg, NJ was a distributor (1959-1989) that contracted with US foundries to produce Iron Art signed trivets.

● Union Manufacturing Company/JZH, Boyertown, PA was sold in 1966. They are noted for their JZH Alphabet Series.

As you check out the Catalog Pages, notice the similarity of trivet designs between manufacturers. Some reproduction molds were generic, while others were shared between foundries. Below is a page from the 1968 John Wright Catalog. 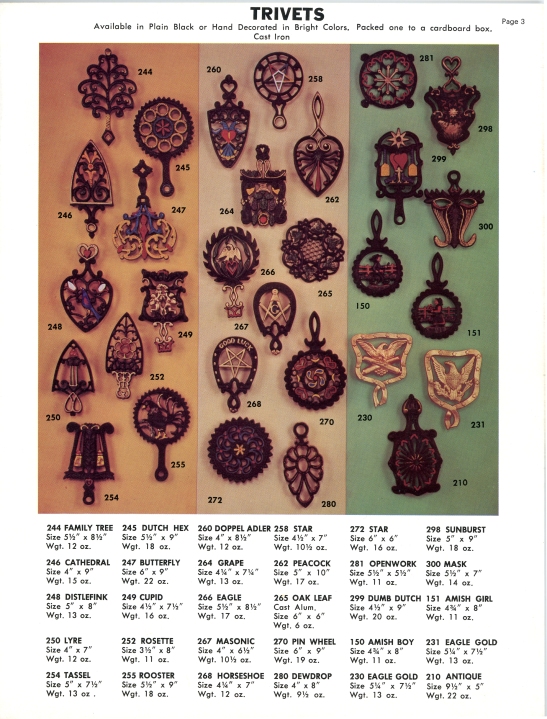 As for value, reproduction trivets tend to be more plentiful and affordable than antique and vintage trivets. Always select the best possible example and upgrade whenever possible. Some contemporary trivets are still available mint in box, like the Wilton motto trivet above. Avoid trivets that are heavily rusted, pitted, or have damage such as cracks or missing pieces.

You might consider collecting an entire series such as JZH Alphabet trivets or prefer to collect by manufacturer, theme or shape. However you choose to collect, be sure to display your trivets where you can enjoy them everyday!