What are horseshoe plaque trivets? Since they don’t have legs they’re not trivets in the traditional sense; but they’re fine castings with an interesting history. Predominantly made of cast iron, they share a basic horseshoe shape and most are topped with a spread eagle. The majority of these trivets date from the late 1800’s through the early 1900’s, paralleling a period when fraternal orders were at their peak of popularity. Dozens of designs have been documented including fraternal symbols, presidential busts, mottoes and decorative images.

Many horseshoe plaque trivets were fitted with a hanging ring or easel, but few of those remain attached after time and use. Most horseshoes were back-coped (routed out on the reverse) to conserve iron and make the horseshoe lighter.

Some collectors claim that, when turned face down, a plaque trivet could have served the dual purpose of a sadiron stand; but whether that was ever true is a matter of conjecture now!

I have several horseshoe plaque trivets in my collection that bear traces of glitter. On most it’s evidenced as traces of a sparkly, gritty substance that’s shiny and silvery-grey. However, my cast iron, gold washed Merry Christmas 1888 trivet has a muted green, red and silver glitter on it which raised the questions: what is the history of glitter, and how can one know if it’s original to a trivet or was added at a later date? 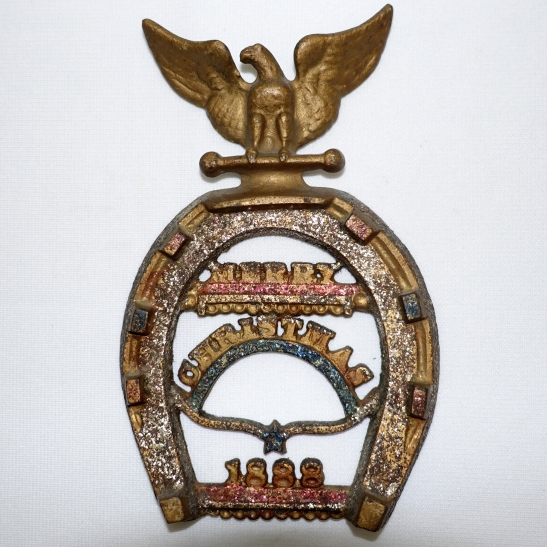 Back in 2008 (when I was writing The Expanded A-Z Guide To Collecting Trivets) I contacted Roberta Ruschmann of Meadowbrook Glitter in Bernardsville, New Jersey. Her father Henry F. Ruschmann was not only the founder of the company but also the person responsible for modern glitter as we know it today. In 1934 he invented the first machine to make glitter particles from sequin waste materials otherwise destined to be discarded in landfills. This family-held company remains the world’s leading manufacturer and supplier of glitter. They also produce beautiful fibers that are used in everything from apparel to automobile upholstery.

Ms. Ruschmann informed me that the earliest glitter was made of colored crushed glass or mica if available. That fits the description of most of the subdued silvery-grey glitter on my 1890s era plaque trivets. Glitter after 1934 was made by her father’s process.

I mailed my Merry Christmas 1888 trivet to Ms. Ruschmann in New Jersey. After running some tests on brushings from the glitter, the Meadowbrook Glitter laboratory was able to determine that the sparkly substance on my Christmas trivet is actually a finely cut metallic yarn. It’s doubtful this metallic fiber ornamentation was available back in 1888 when this trivet was first cast; it must have been added at a later date. 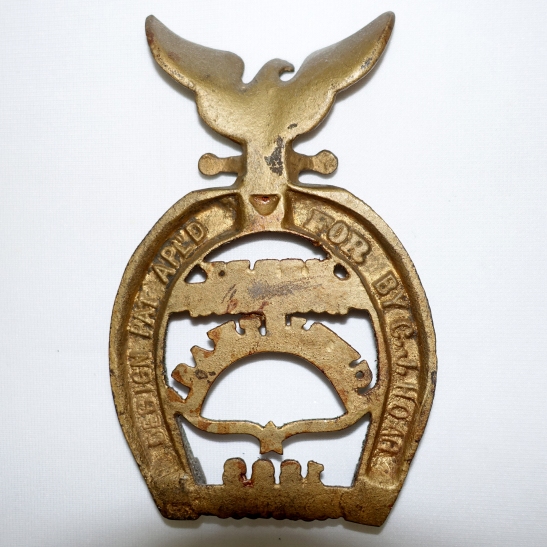 On reverse: DESIGN PAT APPL’D FOR BY C. J. HOAG.
Note the indentation (center top) where an easel was once attached.

It’s a buyers market right now, making it an ideal time to start or add to a horseshoe plaque collection. References that include horseshoe plaque trivets include A Collectors Guide To Trivets & Stands, Kelly & Ellwood, 1990 (45 examples) and The Expanded A-Z Guide To Collecting Trivets, Rosack, 2010 (67 examples). It’s important to familiarize yourself with the different designs so you’ll recognize whether a horseshoe plaque trivet is intact, has damage to the design, or has been painted.

When considering a purchase, be aware that …

● The trivet may appear to be brass if a gilded paint was applied. Check with a magnet before purchasing;  a magnet sticks to cast iron, but not to brass or aluminum.

● Horseshoe plaque trivets were cast through the lower ends of the horseshoe. Occasionally the molten metal might not completely fill the mold, making the wing tips or beak of the eagle at the opposite end appear unevenly cast.

● The eagle may be missing from the top, with the stump cleverly filed to resemble a gate mark.

● Part of the cast lettering or design may be damaged or missing.

● You should avoid the temptation to refinish or remove traces of original paint and glitter, which adds charm and evidence of age to these unique relics.