The following page originally appeared in The Kenrick Catalogue of 1876. The image below, shared with permission, is from the 1986 softbound version of the catalog published by Tharston Press.

The trivets illustrated above might have attached to a parlor stove, fireplace fender or fire-bar rail. Trivets of this type would have supported a tea pot or small dish close to the heat source.

The method of attachment varied. Some trivets had cleats in the front and two longer legs in the back. Others combined cleats with a bracket device, either cast as one with the trivet or moveable and adjustable via a wing nut. 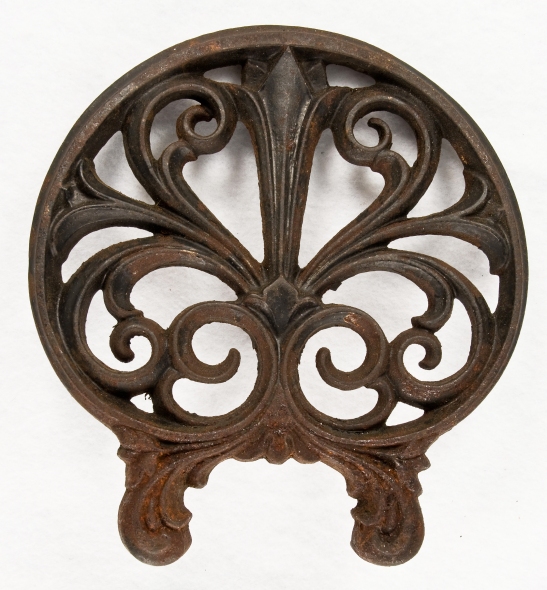 Above: Kenrick No. 8, cast iron, measuring 7 ⅜” x 6 ½”. On the reverse are two 1″ cleats at one end, a center bracket, and the signature A KENRICK & SONS. (This trivet appears fourth from the left on the top row.)

Registered designs from the UK

Some trivets bear a Diamond mark on the reverse. Those were designed and produced in the United Kingdom between the years of 1842 and 1883. The numbers and letters within the mark document the registration date.

In 1884 the system changed to a series of numerical marks called an Rd (Registered design) number to record the date of registration. Note that production could continue for many years on more popular castings.

For a full explanation see Dating English Registry Marks at the Phoenixmasonry Museum and Library.

The Kenrick Catalog of 1876

● Another Good Luck cat trivet from the UK

● Understanding Rd Numbers and the term Made In England